Advertisement at Location A 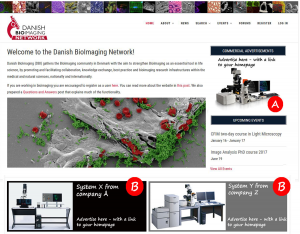 Static advertisement containing a hyperlink to the company’s webpage of choice. Can be bought for a maximum of two consecutive weeks, unless no other companies are in line for the A advertisement. Price pr. week is 1.500 DKK for Sponsor companies1 and 2.000 DKK for Member companies2. Advertisements will be published on a first come first served basis.

Advertisement at Location B

Slide show advertisement, 6 seconds per show, containing a hyperlink to the company’s webpage of choice. The slide shows starts at random in the series of advertisements, ensuring that all advertisements have an equal chance of being shown. Price per week for Sponsor1 and Member2 companies is 500 DKK.

Advertisement in our newsletters

DBI send out newsletters 5-10 times each year to all our members (currently 329). The format is PDF and a commercial placed in the bottom of page 1 (up to 1/5 of the page) can be purchased for 3000 DKK pr newsletter. However, the advertiser should commit to advertise in at least 2 newsletters.

If you are interested in joining Danish BioImaging as a commercial partner please fill out the form below.

We use cookies to ensure that we give you the best experience on our website. If you continue to use this site we will assume that you are happy with it.Ok